Tim Martin joined AdvantageCS in 1998 as a technical writer, tasked with writing modification specifications, release notes and documentation, including help files. Prior to Tim’s arrival, Advantage documentation had been handled by a variety of teams and it wasn’t always easy to maintain consistency. Tim changed all that. Having worked as a technical writer for a bank in Chicago where he learned to read code, Tim was able to hit the ground running at AdvantageCS. He instilled his own system of organization and for the past 22½ years, he has produced top-quality Advantage documentation, year after year.

Dan Heffernan has been Tim’s department head for the past dozen or so years. “Tim has been a joy to have on our team,” says Dan. “His intelligence, combined with a dedication to excellence, has resulted in vast improvements in the quality and coverage of our documentation over many years. It has also turned Tim into a human knowledge database on Advantage functionality!” Dan goes on to say: “On a personal level, I will miss our conversations about our shared love of classical music. I wish you all the very best in your retirement, Tim!”

Another major aspect of the job is writing specifications for possible modifications requested by clients. Over the years, Tim has enjoyed traveling to a number of clients’ sites for in-depth sessions to identify areas of possible modification. On two memorable occasions, Tim spent two weeks in Oxford, England---which, as an English literature devotee, was a real treat for him.

Howard Brooks, Director of Product Development, has also worked with Tim for many years. “Tim not only knows the software exceptionally well, but he also has a great understanding of how it works under the hood,” says Howard. “Tim and I have been estimating software modifications together long enough that we will usually come up with the same ballpark estimate. If we don’t, it means we’d better review the requirements again! I’m really going to miss that.”

And then there are the help files. Today, of course, help is browser-based and each release has its own website. It is still a big job to keep it current but is much easier than the days when it appeared on the screen in pop-up windows and was stored in .chm files using a system called Doc-to-Help. And well, let’s just say it was challenging to work with. Tim does not miss those days.

“I have had the distinct pleasure of working with Tim for over 10 years, and more closely over the last two,” says John Sheehy, Tim’s current supervisor. “He is the ultimate employee with a masterful command of the software and a legendary work ethic. He does all this with a friendly and professional attitude—it is amazing to be able to maintain such consistency over a long period of time. Tim will be fully enshrined in the AdvantageCS Hall of Fame and we will miss him.”

What will Tim miss most about ACS? Yes, it’s the people but specifically, Tim says he will miss the quick wit and sense of humor of many of the coworkers he interacts with most frequently. Although Tim’s shoes will be hard to fill and require a team effort, one person ready to start filling the gap is Tim’s son, Adam Martin. They have worked in transition for the past year or so and Tim knows he is leaving Advantage doco in good hands.

“I remember the evident joy in my dad when he first joined ACS 20+ years ago,” says Adam. “I’d often hear him on the phone in the next room, begging to be sent to visit clients (the oft-uttered phrases “my bratty son” and “can’t take it anymore” still mystify me). Twenty years later, he has wised up and pulled the old bait ‘n switch.

I’m ACS’s problem now. But working with him and learning from him the last few years has been an invaluable experience on so many fronts.

Although he is a skilled technical writer, Tim’s true love is poetry which he has been composing for many years. His first book of poetry, "Stealing Hymnals from the Choir," was a 2010 FutureCycle Poetry Book Prize Winner.

Tim confesses that his favorite aspect of the job has actually been writing Release Notes, which used to be done quarterly but now are monthly. He explains that putting them together is like solving a puzzle (how was the feature actually and fully implemented by the engineers?) and has found it very interesting to see how the software has changed throughout the years. 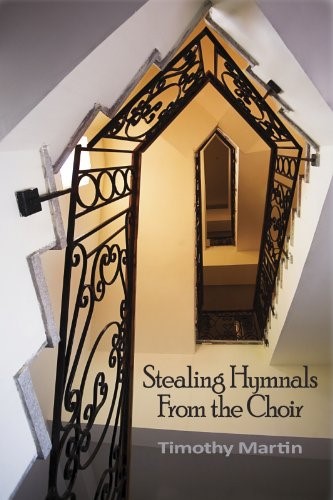 Eva Johnson is the newest member of the documentation team. Eva joined the company during the pandemic and so even though Tim is her supervisor, she has rarely seen him in person. “I actually did get to talk to Tim (in person) very briefly when he came into the office recently because his internet was down at home,” says Eva. “But, before then, I had actually never talked to him face to face. I have to say, he is a very kind and patient person to work with, especially when you're new to Advantage. Good sense of humor, too, which is always a huge bonus!!! I will really miss working with him.”

Tim received an MFA Fellowship from the University of Michigan where he went on to earn his second graduate degree in 1995. His poetry has been nominated for a Pushcart Prize and has appeared in a number of journals, such as The Comstock Review, Slant, The Coe Review, and California Quarterly.

His second published book, "Drowning at the Pool Party for Lifeguards," is a chapbook (small collection of poetry) described by the publisher as one which “visits the intersection of the broadly historical and the deeply personal, and explores how each works to inform the other. Mingling with poems about the Nazi resistance, World War I, and Civil War burials are verses about personal relationships both successful and otherwise, and a number of other subjects.”

Tim’s post-retirement plans have been altered somewhat by the pandemic. He and Dorothy love living in Ann Arbor (not surprisingly, Tim is a big fan of University of Michigan sports teams) and have no plans to move anywhere else, although they may decide to spend a portion of the winter in a southern location. For some time now, they have enjoyed going on cruises about once a year, mostly to the Caribbean. They had hoped to book a Mediterranean cruise soon after retirement but have had to postpone that indefinitely until it’s safe to cruise again. However, with their lifetime National Park passes, they may well take some shorter road trips to some of the less-traveled parks until things get back to normal.

Congratulations, Tim, on your well-earned retirement! We will miss you.

Editor’s note: Tim, thanks for the dozens of newsletters you have proofed for me over the years, and for being so patient until I FINALLY learned to be consistent with those Oxford commas! I think of you now every time I see one in print. I wish you---and Dorothy---many years of enjoyment and relaxation in retirement. I will miss you, my friend.

Report from The Publishing Show

Start with our newsletter.